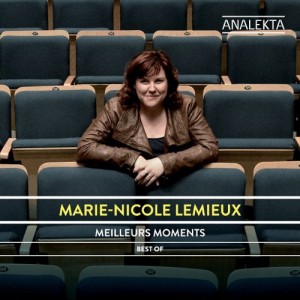 Just a few notes of Marie-Nicole Lemieux’s velvety contralto is all it takes to fall under her spell. With her unique timbre, innate sense of musical line, profound mastery of text, astonishing charm, apparent ease in all repertoires, and remarkable stage presence, Lemieux seems to have it all.

Her career, which now extends to all of the world’s great stages, first flowered in 2000, when she won the Joseph-Rouleau Competition and the Queen Elisabeth Competition in Belgium almost back to back. These were the first milestones in what would become a meteoric rise. This compilation features some of the most beautiful works she has recorded for Analekta by composers such as Scarlatti, Handel, Vivaldi, and Brahms.

The sixty-odd cantatas by Handel are a brilliant testament to his creativity. Key words are highlighted with long melismas, and the ornaments and vocal chromaticism reveal the almost opera-like drama of these works.

Vivaldi’s Stabat Mater takes listeners into a sombre world that is miles away from his dazzling concerti. A captivating lament somewhere between prayer and tears, between pain and acceptance, the voice soars above the magnificent and at times heart-rending music of the strings.

Legend has it that Scarlatti dictated his Salve Regina on his deathbed. The delicately expressive treatment of this supplication reads like an “adieu” to life but also to Queen Maria Barbara, whom he had served for many years.

Over the decades, Brahms would return time and time again to the lied. A solitary man, perhaps he considered it a more intensely emotional form of expression, his secret garden (he called his collections of lieder “bouquets of songs”). By turns, he could evoke the sting of unrequited love, solitude, the finality of existence, and nature’s solace.